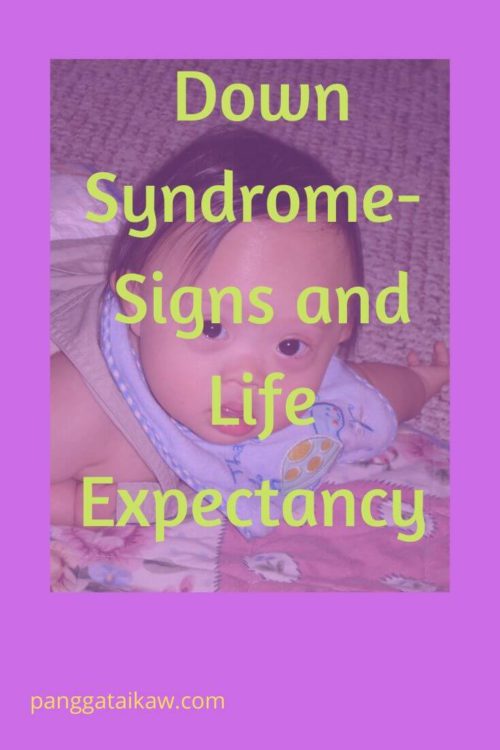 When I got pregnant at the age of 43, my greatest fear was having a baby with Down syndrome.

First, because I was an old first – time mom ; second, I had a sister with Down syndrome and lastly, my husband had a brother who was also Downs but died at a young age.

So, when I had my first pelvic ultrasound at around four months, I could not contain my excitement ( coupled with fear ) and asked the doctor ( sonologist ), ” Are you able to see signs in there that my baby will be Downs or not? ”

To my relief, he said, ” Yes, we do usually see a sign, and there is nothing in here. ”

I could have hugged him then and there with the good news.

At around 6-7 months of pregnancy, I had another ultrasound and aside from asking about the gender of my baby, I asked again  the doctor ( my obstetrician ) about the possibility of my precious one having a defect or syndrome.

And of course, when I finally had my son, I looked at him and seeing that he looked normal, I could not believe that this beautiful human being just came out of my body.

He is already a teenager now and in high school. But he will always be ” my baby.”

New moms out there truly understand how it feels looking at and holding your baby for the first time.

Having a baby gives you the greatest feeling on earth!

Even if your baby has some “odd” features, like an upward slanted eye, you will surely feel in your heart that your baby is God-sent and your little angel has finally arrived!

But at the back of your mind, you will have those doubts, ” If my baby has Down syndrome, what are the other signs and about his life expectancy, ” How long will he live? “

What are the signs that your baby has Down syndrome?

These are crucial questions especially for first time moms.

And would also include a mom who before birth knows that her baby would be having Down syndrome or another mom who has no knowledge but looking at her baby for the first time sees something odd about his appearance, or some moms who are not at all aware but the doctor tells them later that their baby has Down syndrome.

I believe they would feel that their world is spinning or the other way around, they would gladly accept that this baby is God-sent and whatever he is, they will take care of him and nurture him no matter what.

Raising a Child with Down Syndrome-( Hailey is now Three ! )

A Mother’s Unconditional Love… it is For Real

Here are the most common signs that you may or may not notice right away at birth:

The outer corner of the eye will be turned up rather than down. The shape is also very similar to that of someone of Asian descent.

This is usually the most noticeable physical feature of Down syndrome as your child grows up.

Because of poor tone in the facial muscles, Down syndrome babies  will not have  much curve from the nose, cheeks or mouth.

Their cheeks seem to hang on the face as well. This is noted  when you look at the baby from the front wherein there is also not much shape to the cheeks.

This is also very typical for babies with Down syndrome. New parents and families  often ask “Why does my baby stick his  tongue out?”

This is either because of a small mouth, large tongue, or simply poor tone.

This single  crease across the palm of the hand is seen in 45% of children with Down syndrome and  is a result of hypotonia as the hand was not held in a tight fist while he was growing in the mother’s womb.

That means 55% of kids with Down Syndrome  do not have this, but if they have, it’s quite typical.

Don’t get confused though, because some normal kids can also have  a single palmar crease.

A baby with Down syndrome always  feels floppy or limp.

When you hold him, it feels like he is  going to slip through your hands or arms and if you lay him across your hand, he will look like a wet noodle.

Growing up, they are so huggable because of this.

This is also the reason why they may develop motor skills later than normal kids, thus, usually learn to turn over, sit up, or walk much later than usual.  Their limbs become so flexible as they grow up.

Pangga, my sister who had Down syndrome and for whom this website is dedicated,  had all those physical signs above, plus she had short stature ( also typical ) as well.

What was very amusing as she was growing up was that she could  pull her legs up to her face very easily even  when she was sitting down.

Growth and development- how delayed will they be compared to normal kids?

Parents of babies  with Down syndrome need to understand and accept that their angels will develop later than normal kids.

They will definitely learn how to stand, walk and run but not as fast compared to other kids their age.

Different kids develop at their own pace though, so one kid might walk at 2-3 years old, while others walk at around 3-4 already.

Usually, they  can walk on their own between 16 and 42 months with the average being 24 months.

Other common cognitive and behavioural problems may include:

Again, Pangga learned how to talk and communicate but of course, was not able to sustain good conversations.

Unluckily, she did not have any interventions like therapies because she  grew up in a small town where these were not available.

But she learned how to sing ( She had a beautiful voice ! ) just by listening over the radio and watching television or just hearing songs from other people.

We used to live in a house just a few steps away from a church and even if she did not attend mass regularly, she learned to sing the mass hymns just by overhearing people sing them during Sunday masses.

And boy, Pangga loved to sing that even in the middle of the night when everyone is asleep except her, she would sing at the top of her voice.

When she sang and we would appreciate and clap our hands after her rendition, she would always giggle and have that captivating smile.

What a joy to behold in our family!

Congenital defects-will they have other illnesses at birth?

1. Heart defects– Almost 50% of these kids have congenital heart disease which     can lead to high blood pressure in the lungs, thus the heart is unable to  effectively and efficiently pump blood, and cyanosis (blue-tinted skin caused by reduced oxygen in the blood) develops.

If severe, this could be a cause of death at an early age.

2. Vision problems – More than 60% of children with Down syndrome have vision problems, including cataracts (clouding of the eye lens) that may be present at birth.

Other eye problems that could occur at birth include near-sightedness, “crossed” eyes, and rapid, involuntary eye movements.

Pangga had near-sightedness and rapid, involuntary eye movements, the latter was the reason why one of her young nieces  was scared of her and did not want to come close to her aunt.

They need to be seen by an eye doctor as soon as possible to prescribe either glasses or surgery.

3. Hearing loss –  About 70% to 75% of children with Down  syndrome have some hearing loss, sometimes because of   structural defect in their ears.

They need to be screened at birth and have regular follow-up hearing exams.

Later in life, or as these children grow up, some other health concerns may come up, such as infection, epilepsy ( seizure disorder ), usually developing for the first two years of life, gum disease and dental problems, disrupted sleep patterns and sleep disorders ( even obstructive sleep apnea ).

Life expectancy- do they live until adulthood?

My sister, Pangga, lived until 46 years old.  But because she reached only a mental age of around 5-6 years old, she was always considered the youngest in our family, even though she had four younger siblings.

Mr Joe Sanderson  from Cleveland, who was born in 1936, and is believed to be the oldest person with Down Syndrome,  turned 80 in 2016.

Both lived happy, full lives with support of family and friends. I could not find reports though that both are still alive.

The life span of Down syndrome children, however, depends if they have concomitant illnesses, like congenital heart disease and other factors, like development of infections and other health concerns as they grow up.

If properly trained  and supported, some people with Down syndrome can live independently in a home or in an assisted independent arrangement, and a few even develop romantic relationships and even get married.

Many people with Down syndrome are also able to work or  volunteer, thus, able to contribute to the progress of their communities where they live.

In big countries like Canada, the government usually supports people with special needs starting when they are newborns, and even provide assistance for them later so they are able to live independently and have profitable income.

A family who is blessed with a child or children with special needs like Down syndrome, maybe overwhelmed at first, but with full support within the family and the community as a whole especially the government, these kids can grow up and become productive citizens .

You may have learned of a couple from Australia who abandoned their baby with Down syndrome ( named Gammy ) and just got the normal baby ( they are twins ) born to a surrogate mother from Thailand in 2013.

Gammy, born with a heart condition, is now 6 years old and lives with his surrogate mother in Bangkok. The family he is now with may not be related to him by blood, but they feel so blessed to have him in their midst.

Truly, kids with Down syndrome, bring an immeasurable joy to everyone in the family and there may be lots of challenges raising them, but in the end the happiness that they bring in the household surpasses all these. 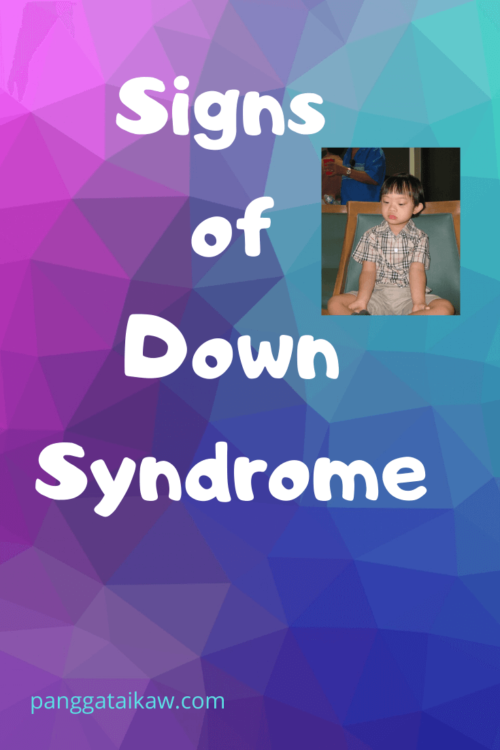 Do you have a child with Down syndrome? How does your child bring joy to your family? Please share your stories with us.

Check out these books about Down syndrome. Click the image to buy.

30 thoughts on “Down Syndrome- Signs and Life Expectancy”